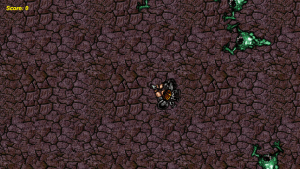 This ghost shooter game is a game I created on Construct 3. I followed a tutorial on how to create the game. The tutorial contained the teachings of how to use events, how to print values onto text, how to do basic character movement, and etc. You move around using the arrow keys and you can rotate using your mouse. Each ghost takes a few shots to kill. Once one touches you, you die.

Logline: The player discovers some ghosts and has to shoot them before they catch up to the player.

Goal: My goal for the game was to follow the tutorial without missing anything, and making a game that was playable and had a goal to it. The goal was to get the highest score you can, without dying.

What can be done to make the game better?

Were there any problems? If so, then what were they?